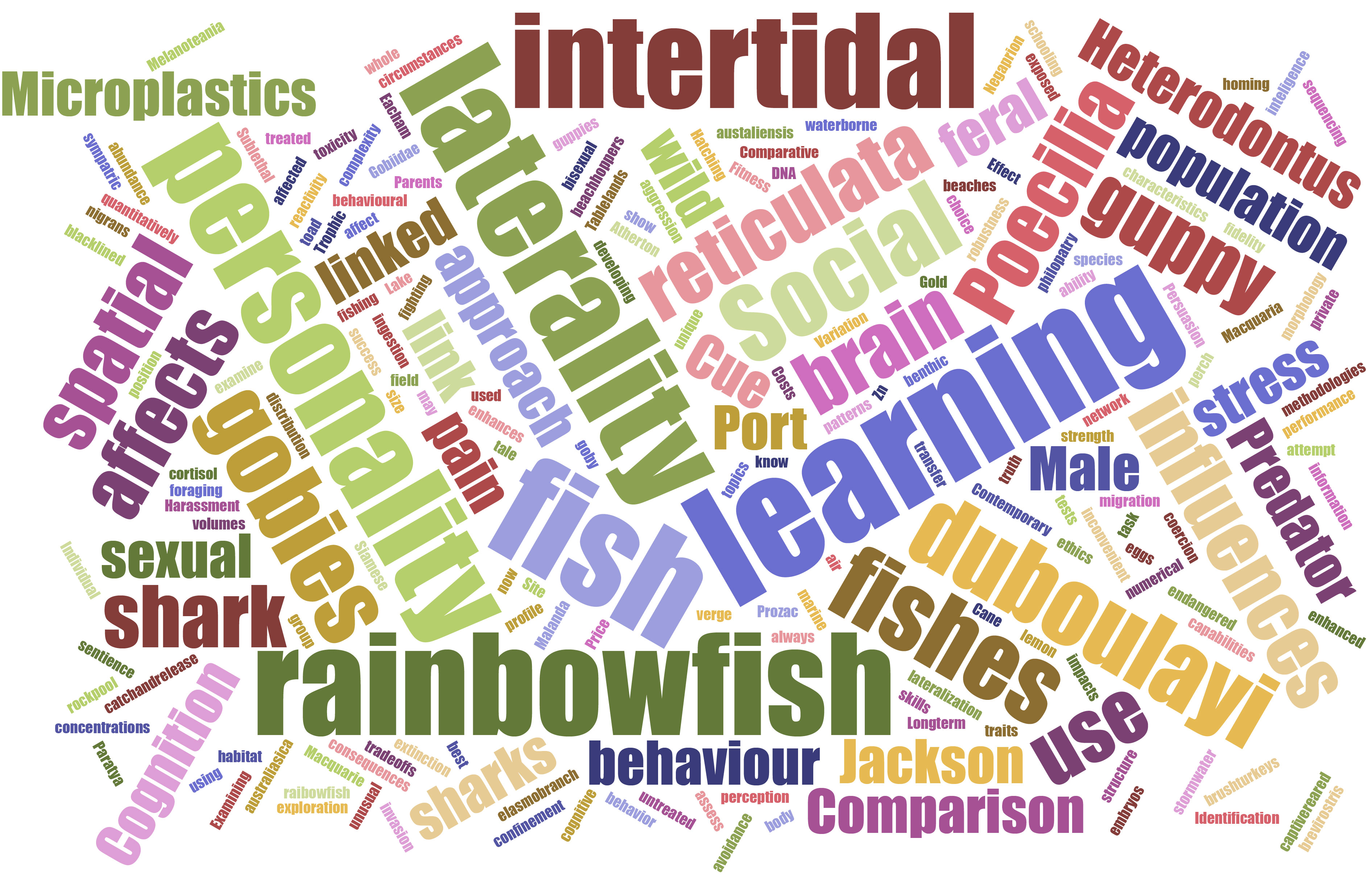 Fish Lab word cloud based on titles from about 40 recent papers.

Movement and migrations of Port Jackson sharks in NSW Australia

We have been tagging and collecting DNA samples of PJ sharks from around Australia since 2012. Jenna, Jo and Pascal have been isolating specific markers to look at the genetic and population structure of the sharks in this area. This work was part of Jenna's masters. There's still plenty to do!

Contrary to what most people think, primates are not the only animals that show cerebral lateralization (e.g. handedness), or individual personality traits. Paolo, Flavia and Iestyn are all inviestigating the link between these traits and cognition in rainbowfish and guppies

From our research on PJ shark site fidelity and social networks, we know the sharks spend most of the breeding season in specific reefs within Jervis Bay, and come back to those locations every year. They also show consistent social interactions with particular individuals. Catarina and Sherrie are interested in the mechanisms behind these behaviours. They will investigate possible cues for orientation and navigation between known locations, factors behind social recognition and aspects of social cognition and learning.

Daily activity patterns and behaviour in captive and wild sharks

Julianna is working on a project focused on the biotelemetry of the Port Jackson shark. Accelerometers attached to captive sharks gather data while they are performing behaviours like resting, swimming, foraging, or mating. By looking at this accelerometry data we can create signatures of what each of these behaviours looks like. Later on this information can be applied to sharks in the wild so we can find out more about their physiology and habits. In the future, applying accelerometry data to Port Jackson social interactions can be used to reveal more about this species.

Joni is studying the smooth stingray population of Jervis Bay with relation to their use of the Woollamia Boat ramp area where fishermen have been provisioning the stingrays for over 30 years. Research suggests provisioning can cause changes to natural behaviours and habituation, improper nutrition and overfeeding, and changes to population structure and trophic balance. No population assessment for the smooth stingrays of Jervis Bay has been conducted as yet, and Joni aims to achieve this. Additionally, assessment of the stingrays’ reliance on the provisioning site will be assessed, along with the social interactions between conspecifics in response to a food stimulus.

Rob is studying sociality in a population of reef manta rays in Raja Ampat, West Papua, Indonesia. This remote, near-pristine area provides great opportunities to study the natural social behaviour and structure of a large manta ray population. Rob will conduct social network analysis using photo-ID data from over 600 identified manta ray individuals. He will also use aerial UAV videography and acoustic telemetry to study social dynamics. The project is in collaboration with Marine Megafauna Foundation.

Justine is manipulating the rearing condition of salmonids in Canada to see if we can improve their survival once they are released to the wild. Billions of fish are reared in hatcheries and released every year. Most die within a couple of weeks.

When tadpoles transform into frogs their brains undergo major reshaping. How much of their prior life as tadpoles to they remember? James is investigating if conditioning during tadpoles carries over to frogs.

Pain perception and sentience in fish