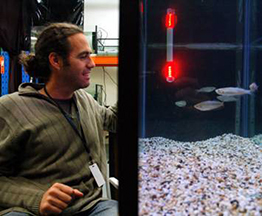 Culum has made a significant contribution to the study of behavioural ecology of fishes over his research career. His research niche lies in the study of fish behaviour and its application to fisheries science with his most significant contribution being enhancing our understanding of fish cognition and behaviour. Culum is a well-known champion of fish intelligence. All but six of his 120+ peer reviewed papers and one of his 14 book chapters have fishes as the primary focus. Collectively he has 150+ publications which have been cited over 7400 times and he has an H-index of 44. He is in the top 2.5% of researchers in Research Gate.

Culum has worked with a wide variety of model organisms including salmoniids, sticklebacks, rainbowfish, guppies, sharks and rays. Much of his PhD research at the University of Queensland (2000) and post docs at Cambridge University focused on predator recognition and the social behaviour of fishes with a particular emphasis on social learning. His two reviews of social learning in fishes have been cited over 400 times each. Culum has applied his knowledge of fish cognition to enhancing the post-release survival of hatchery-reared fish (life-skills training). His review of this topic has been cited 400 times and life-skills training is now common practice in hatcheries world-wide.

Culum increasingly focuses on fish welfare and ethics. For example, he is a member of the ASC Fish Welfare group which is drafting new standards for fish welfare in aquaculture.

Culum was the guest editor of a special issue on learning and memory in fishes in the review journal Fish and Fisheries. This collection of work was later released as a book entitled Fish Cognition and Behaviour published in 2006 & 2011 by Blackwell Scientific.
He is also Editor of The Journal of Fish Biology.